I needed something the other day at the bank, to withdraw some money. Getting a receipt, I looked at a bank clerk, not a young, but not yet a very old woman, in front of me behind the barrier. Giving me a signature receipt, she, looking at me through large darkened glasses, suddenly asked: "Do you remember me?"
I looked at her carefully. I remembered everything at once, although more than fifty years passed. “I'm sorry, but I don’t know you,” I lied in confusion, and, taking the receipt,  left the bank.

I left the bank. Thoughts and memories overpowered me. Of course I know this woman. And I remember everything, as if it happened yesterday.

... Somewhere in the street, I found a piece of a cast-iron grate, which, it seemed to me, I could turn into a kind of pistol. Having applied imagination and effort, I worked pretty well with two files (rectangular and round), and got something in shape vaguely reminiscent of a Mauser. A heavy thing, just what the commissars in leather jackets in films about the revolution waved.

Bringing my product to perfect condition with a file, I sat with the guys near our house on the playground.

Volodka Manokhin came up, a small one from the neighboring building. He is already big, he not only smokes, but also has a passport, which he boasted and showed everyone.

Having finished a cigarette, he attached it between his fingers and with a deft click, and sent it on a long flight.

He sat down beside me on a swing bench.
"Well, show me what you have here!"

I handed him my dummy.
“Wow! Heavy bastard. If you treat someone to it, that will be something,” he gladly stroked each bend of the gun with his hand. “How finely hand-crafted. Not the slightest burr. You, fellow, have done a fine job! "

Without hiding his pleasure, Volodka was pawing my product ...
“Here -  it is necessary to round it off a bit, so that the arm will fit better. But I will do it. The work piece is good. ” Volodka put the gun in his belt.

“Hey Volodya, bring the gun back.”
"What?"
“Give the gun back.”
Volodka looked at me with unseeing eyes.
“I'll make a holster for it. Excellent brass knuckles. ”
“Give me the gun!” It’s mine!"
"Was yours, became mine."

I did not like such a conversation at all. I approached Volodka resolutely.
“Volodka, give me the gun! I worked on it !! ”
“What are you? Don't you understand Russian? ”
"Understand. Give me the gun! ”

“I'll give it back now!” Volodka grabbed my nose with smoked fingers, twisted my nostrils and ordered: "Get out of here!" then he shoved me away, like a bag of garbage.

The guys sitting nearby laughed. Valerka Chernov, roared especially loudly,
who cut a piece of wood with a knife.
I again approached Volodka.
"Volodya, give me the gun. I beg you. Please do!"
“Off with you!” With a short jab to my jaw, he sent me to the ground.

I got up, and brush myself off. Resentment, a feeling of indignation embraced me. Tears welled up. But I tried not to cry.

And again, I am in front of him.
“Volodya, give it back!”
“How stupid you are!”
He grabs me by the scruff of the neck (after all, he’s six to seven years older, a very large age difference in adolescence), turned around and inflicted a weighty kick below the small of my back. I flew a few meters away, all to the hooting of the surrounding guys. Valerka laughs especially disgustingly.

“Volodya, give him some more! He asked for it!” he screams.

Having risen from the ground, I am heading to Volodka. There is a bell fry ring in my head. The blow to the coccyx was so strong that my mind became confused.
“Give me my gun!!!” Everything seems to be in a fog.
"What? Haven’t you had enough? I'll add some more! ”
Manokhin grabbed my collar to put me in a  more convenient position for a subsequent kick.
But something happened to me. I gripped the piece of cast iron from under his belt, and struck, not understanding where.  I don’t feel, I don’t feel anything except the impact of something hard against something soft ... at the same moment I rushed away, without understanding anything, and ran for my dear life… Where and why I run - I don’t know, I don’t understand anything ...

Time passes. I'm somewhere on a strange street, far from home. What should I do? Not to go home is impossible. But I'm going ...

It gets dark late in the summer ... I approach my house. Valerka Chernov sits near the entrance, still poking around with the same piece of wood.
“What have you done? You’ve killed him! ”

Everything inside me is gets cold. I enter the apartment in an almost unconscious state ...
That same evening, closer to night, Volodka Manokhin’s parents came to our apartment. With them was a girl of about eight or nine, with dark sad eyes. His parents and mine spoke in elevated tones.

Then the parents of both families went to the police together. I trailed behind like a tail of a fat fat sheep. The policeman in uniform said that my fate, as well as the fate of my parents, depended on results of the treatment. In any case, the Criminal Code contained an article for both a minor offender and parents who didn’t care for his upbringing ...

Never again did I see him. But the younger sister (whom I never met again either) stuck in my memory.

And so I remembered her (and she me) now, more than half a century later ...

Things got into my head ... You mustn’t offend those who are weaker. Even a small mouse driven to despair can turn into a dangerous beast.

That's what I thought about, stepping off the doorstep of Sberbank and remembering the sad eyes of a little girl ...
at July 06, 2020 No comments:

On the Wrestling Mat 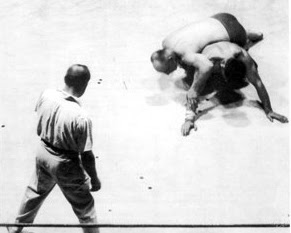 No, I NEVER give in. That’s why a lot of people don’t like me. In this respect, I’m just like my father, a remarkable individual who deserves volumes of colorful description.
Lord keep him for all his idiocies!
Among those rare instances where I actually gave up, the one that comes to mind occurred during my athletic career as a wrestler (I also used to be a weightlifter and amateur gymnast). It was some minor local sporting event. I was quite strong, but was a novice and unknown to the public. My opponent was a renowned wrestling champ. And was he strong! I felt it immediately as we shook hands before the match. But, you know, luck smiles on beginners and fools.
I had him down on the mat in a flash. How I managed to take down a bull like that is still a mystery to me. It might have been fear. Or maybe it was his overconfidence in facing a small boy without titles. Whatever it was, the crowd roared. They were with me. They longed for my victory and this added to my strength. They wanted to see the champion defeated, preferably by a kid from the provinces. The public always supports young unknowns from the sticks. All the same, I couldn't hold him down, although I was in the prime of my strength. He had obtained all his titles with good reason, after all...He endured my assault, recovered, and then went on the offensive. His techniques were many and varied. One of them was grabbing me by the balls. This brought me no joy. I appealed to the ref.
"Come on, boy!" was the neutral reply. “Go do your thing..."
My opponent took me down. There I am in the bridge — a seriously disadvantageous position for any wrestler. You need stamina, will power and a bovine neck to continue fighting in the bridge. Fight on I did. But... then the bugger grabbed me by the balls again! And started pulling them like suspenders!
As I was gazing reflectively at the bright lights on the ceiling in peril of losing one of my chief assets, I concluded that, whatever the outcome, my life would continue after the match and my testicles might come in handy some day. After a moment’s meditation, I relaxed, broke the bridge, and gave in. For the good of the future generations, if you will.
No, I NEVER give in, unless it’s for the good of others.
at December 23, 2019 No comments:

What I'm Thinking these Days 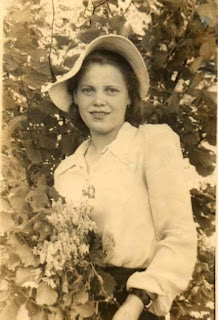 I needed something the other day at the bank, to withdraw some money. Getting a receipt, I looked at a bank clerk, not ...